Bugs and the Victorians by JFM Clark 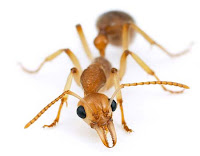 Insects have antennae, powerful mandibles, six legs and, sometimes, wings. Science fiction writers often turn to them for inspiration, from the lifecycle of Ridley Scott's alien to the Tritovores and Vespiforms in Doctor Who; and, as JFM Clark explains in Bugs and the Victorians, it was the "utterly alien morphology" of insects that fascinated 19th-century naturalists. The very lack of any point of analogical comparison to humans enthralled these early entomologists, many of them closet atheists seeking to challenge Christianity's anthropocentric worldview. Men such as Raphael Meldola ("Darwin's entomological bulldog") openly discussed the theory of natural selection at a time when other professions remained more circumspect.
But if weird, freakish insects don't obviously resemble us physically, the behaviour of the so-called "social" insects (all termites and ants, some wasps and bees) has for long been regarded as instructive and, indeed, exemplary. Virgil, Horace and Pliny all sought analogues for human social organisation in the insect world, presenting ant nests and beehives as model societies. In Victorian Britain it was especially apposite to talk of a "queen" bee, one 19th-century apiarist even observing "the Tory loyalty of all her subjects". More offensive than the idea of Tory bees was the use of ants as a justification for slavery. "I found the rare Slave-making Ant," wrote an excited Charles Darwin to a friend, "& saw the little black niggers in their Master's nests." As Clark points out, Darwin supported the anti-slavery movement, but the idea that a species of black ant was enslaved by another titillated the Victorian imagination. "More notice has been taken about slave-ants in The Origin than of any other passage," Darwin ruefully observed.
Entomologists were regarded as harmless amateurs by their peers, says Clark, but their moment of glory came during the days of the British empire, when insects became public enemy number one. Once the link between mosquitoes and disease was understood, entomologists were granted greater respect, and were called upon to draw up taxonomies of "the mosquitoes of empire". Just as reviled as the mosquito was the humble house fly ("NOW IS THE TIME TO STRIKE THE FLY" declared one Victorian poster), which brought diarrhoea and typhoid at home, and decimated armies abroad (in "The Defence of Lucknow" Tennyson included the "infinite torment of flies" in his harrowing list of what a soldier suffers). Identification of the house fly with the wartime enemy was complete when for a period they were known as "winged Huns". When the entomologist Harold Maxwell Lefroy – scourge of the house fly and founder of Rentokil – choked to death on a gas insecticide of his own invention, his last words were: "The little beggars got the best of me this time!"
If insects are still too disconcertingly non-human to be loved by everyone, entomologists themselves have not wholly escaped suspicion. Clark cites one case in which a passion for butterfly collecting was regarded as an obvious sign of lunacy. He also observes that Sir Arthur Conan Doyle makes his villain an entomologist in The Hound of the Baskervilles, although he neglects to mention that Sherlock Holmes in retirement took up beekeeping and even wrote a Practical Handbook of Bee Culture, with some Observations upon the Segregation of the Queen. We may never completely overcome our entomophobia – epitomised in films such as Them! and The Swarm – but this intelligent and enlightening book shows just how much insects can teach us about ourselves.
Posted by Ian Pindar at 3:23 PM
Labels: from the Guardian: 12/09/09