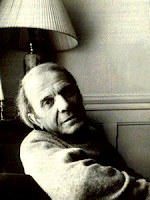 On this day in 1995 the French philosopher Gilles Deleuze committed suicide, throwing himself from the window of his Paris apartment. He was 70. 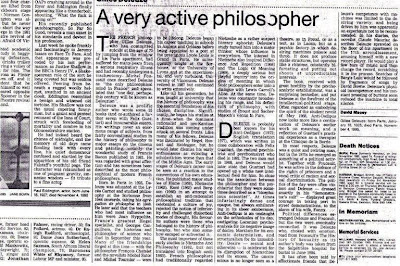 Today I wanted to mark his passing by posting a letter. At least, if I give it a virtual existence, it will always be around, in the public domain, even if one day my garden office burns down. But first, some context is required.

Looking back over my old journals – always an uncomfortable experience, meeting a younger self – I can just about piece together the chain of events.
In autumn 1994 I had completed a year of working towards a PhD on Deleuze and literature. However, all that was about to end.
‘The British Academy turned me down – again!’ I wrote in September 1994. ‘That’s the second time and it’s becoming a regular event. People will queue up to see the disappointment of Pindar. What I don’t understand is, having shown a willingness to fund myself for a year, why was I not even on the waiting list as I was last year? My ideas are so much more certain, my – oh! this country! this shitdish of a country! Christ what a planet!’

Around this time I must have reviewed Paul Patton’s English translation of Deleuze’s Différence et Répétition in the Times Literary Supplement.
My PhD supervisor had written to Deleuze a couple of times, never receiving a reply, and I thought I’d have a go. I sent a photocopy of my review, accompanied by a letter in which I pointed out that someone I knew had been driven almost suicidal by reading Différence et Répétition.
I also explained that although I admired Deleuze a great deal, the word ‘fan’ implied fawning gratitude, so I was content to be an ‘anti-fan’, an idea that set up a little resistance between us, I thought. Then, as an afterthought, I rather blew my cover by asking for a signed photograph.

‘Feel incredibly tired this morning,’ I wrote in my journal on 7 December 1994. ‘Yesterday evening I felt an overwhelming sense of not being wanted or needed by anyone.’ And then the postman passed by and an envelope dropped through the letterbox (this is no longer my address, so no mail please).

In my journal I called it ‘probably the most exciting letter in my short life: from a M. Gilles Deleuze.’ Here it is: 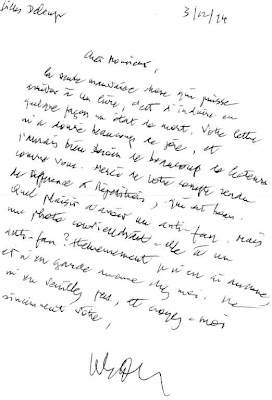 The handwriting is in places almost illegible, but I didn't know then that Deleuze was seriously ill, having undergone a tracheotomy. He had lost the power of speech and considered himself to be ‘chained like a dog’ to an oxygen machine.

The full text of the letter reads:

Dear Sir,
The worst thing that can befall a book is for it to induce in some way a state of death. Your letter gave me a lot of joy, and I will need readers like you. Thank you for your review of Différence et Répétition, which is nice. How nice to have an anti-fan. But would a photo matter to an anti-fan? Happily, I don’t have one, and I don’t keep any with me. Don’t hold it against me, and believe me sincerely yours,
G. Deleuze

I think it shows that Deleuze had a great sense of humour, even when seriously ill, and that thoughts of suicide could not have been further from his mind at the time of writing.
For me, at that miserable time in my life, it was an early Christmas present.
'The whole letter calms me in a way I can't explain,' I wrote in my journal. 'Astounding. A happy day.'
Posted by Ian Pindar at 12:13 PM
Labels: Deleuze, dirty laundry, RIP

Thank you so much for relating this story...Unfortunately, even though true, it may appear that today all of our memories and encounters are just more stories - as we furiously type and read ourselves to each other. Anyway, it was touching...Thank you so much.

Let's hope that suicide joke did not get to him in the end.