If I Am Not For Myself: Journey of an Anti-Zionist Jew by Mike Marqusee 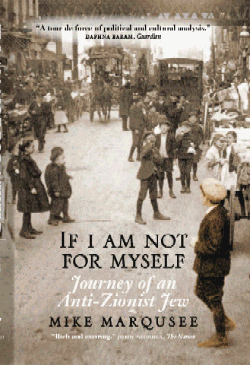 “The first person to call me a self-hating Jew was my father,” Mike Marqusee writes in this taboo-busting memoir-cum-manifesto. Delving into the lives of his father and grandfather, both left-liberal, civil rights-supporting American Jews – he argues that they committed “a colossal historical error” in supporting the Zionist atrocities of 1948. As the historian George Antonius observed in 1938: “No code of morality can justify the persecution of one people in an attempt to relieve the persecution of another.” The book tries to explain – setting out its case clearly and rationally – why for some Jews, Israel has ceased to feel like a just cause. This change of attitude is attributable in part to a generation gap, but also to Israel’s evolving history. “Mainly, what turned me into an anti-Zionist was just following events,” Marqusee says, “and finding the pro-Israel narrative and its underlying Zionist claims unsustainable in the face of the evidence.” His father came round to his way of thinking after the Sabra and Shatila massacre. “OK,” he said, “you were right. They’re bastards.”