Facts are Subversive: Political Writing from a Decade without a Name, by Timothy Garton Ash 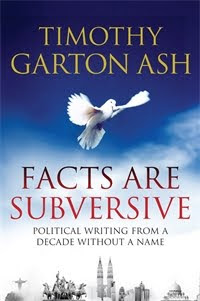 The historian Timothy Garton Ash is proud of his scholar-journalist status. A master of this “mongrel craft”, he composes perfect “essays in analytical reportage”. A major theme in this outstanding collection is how national identities are constructed, the narratives we tell ourselves – and how in this "decade without a name" these narratives begin to lose their shape and coherence, especially in Britain (“We have gone from a simplistic, misleading mythical story – ‘Our Island Story’ – to a condition where we have no story at all”). What does it mean to be British anyway? he asks. (He is pointedly an “English European”.) Elsewhere, he observes that when politics and the media meet there’s usually an element of “fact-fixing”. The runup to the Iraq war – towards which he maintained “a position of tortured liberal ambivalence” – being the obvious example. (“I was wrong,” he admits.) To call the last decade the noughties is “like strapping a frilly frock on to a sweating bull”, Garton Ash concludes. It was a decade dominated by disastrous US foreign policy and probably deserves to remain nameless.
Posted by Ian Pindar at 11:48 AM
Labels: from the Guardian: 03.04.10