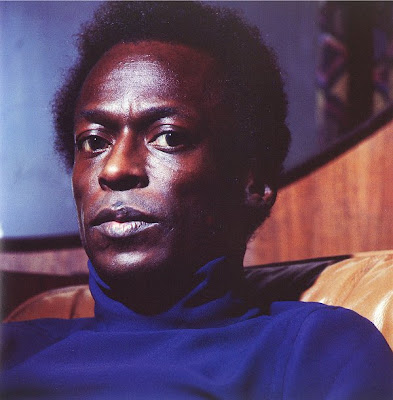 Some Aspects of Miles Davis from Miles: The Autobiography (Picador, 1990)

“The music we did together changed every fucking night; if you heard it yesterday, it was different tonight. Man, it was something how the shit changed from night to night after a while. Even we didn’t know where it was all going to. But we did know it was going somewhere else and that it was probably going to be hip, and that was enough to keep everyone excited while it lasted.”

[268]
“It was loose and tight at the same time. It was casual but alert, everybody was alert to different possibilities that were coming up in the music.”

“Jimi Hendrix was there, too. He and I were supposed to get together in London after the concert to talk about an album we had finally decided to do together . . . We were waiting for Jimi to come when we found out that he had died in London, choked to death on his own vomit. Man, that’s a hell of a way to go. What I didn’t understand is why nobody told him not to mix alcohol and sleeping pills.”

[308]
“I got further and further into the idea of performance as process. I had always written in a circular way and through Stockhausen I could see that I didn’t want to ever play again from eight bars to eight bars, because I never end songs; they just keep on going.”

[319]
“I used to love poetry, especially the black poets – The Last Poets, LeRoi Jones, Amiri Baraka [sic] – in the 1960s, because the shit the poets were saying and writing about was true, although I know a lot of people – black and white – didn’t want to admit that it was true, then or now. But it was, and everybody who knows anything about this country and who is aware of truth knows that what they were writing was the truth.”

“At the table where I was sitting, a politician’s wife said some silly shit about jazz, like ‘Are we supporting this art form just because it’s from here in this country, and is it art in its truest form, or are we just being blasé and ignoring jazz because it comes from here and not from Europe, and it comes from black people?’

This came from out of the blue. I don’t like questions like that because they’re just questions from someone who’s trying to sound intelligent, when in fact they don’t give a damn about it. I looked at her and said, ‘What is it? Jazz time or something? Why you ask me some shit like that?’

‘Do you really want to know why jazz music isn’t given the credit in this country?’

‘Jazz is ignored here because the white man likes to win everything. White people like to see other white people win just like you do and they can’t win when it comes to jazz and the blues because black people created this. And so when we play in Europe, white people over there appreciate us because they know who did what and they will admit it. But most white Americans won’t.’

She looked at me and turned all red and shit, then she said, ‘Well, what have you done that’s so important in your life? Why are you here?’

Now, I just hate shit like this coming from someone who is ignorant, but who wants to be hip and has forced you into a situation where you’re talking to them in this manner. She brought this upon herself. So then I said, ‘Well, I’ve changed music five or six times, so I guess that’s what I’ve done and I guess I don’t believe in playing just white compositions.’ I looked at her real cold and said, ‘Now, tell me what have you done of any importance other than be white, and that ain’t important to me, so tell me what your claim to fame is?’

She started to twitch and everything around her mouth. She couldn’t even talk she was so mad. There was a silence so thick you could cut it with a knife. Here this woman was supposedly from the hippest echelons of society talking like a fool. Man, it was depressing.”