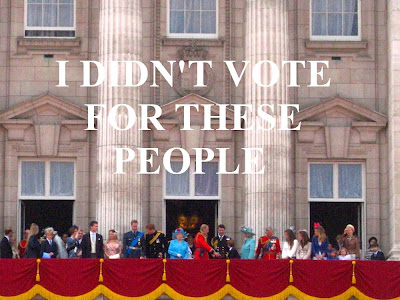 It was claimed last year that the royal family cost us peasants a mere 69p each, according to Buckingham Palace accounts.
The truth is, of course, very different.
Buckingham Palace divides the official cost of the monarchy by every man, woman and child in the country – not all of whom pay tax.
More details to counter the spin here and here, but one factor never included in the Palace’s figures is the enormous cost of security – bodyguards to protect the princes when they tumble out of nightclubs, for instance, or on holiday. While taxpayers are also paying the security bill for princesses Beatrice and Eugenie at an annual cost of £250,000 a year each.
Are we getting value for money?

• £23,000 for a helicopter to take the Queen and Prince Philip to the Kentucky Derby

• £9,000 for a Chinook helicopter to take Prince William to a stag night

It all adds up, doesn't it?

There will be a demonstration against royal funding on Monday 5 July to highlight the huge cost of the monarchy to the taxpayer at a time when the country is facing massive public spending cuts, and to raise questions about the lack of scrutiny and accountability for royal finances.

Republic spokesperson Graham Smith: "We'll be demanding real transparency and accountability from the palace, so we can really see how much public money they are wasting at a time when government spending is under the pressure of huge cuts. Royal finance reforms promised by the government are a start, but they don't go far enough or quick enough."

Peter Tatchell: "At a time of austerity and cuts, the monarchy should not be exempt. The Civil List should face the same cuts as all other government expenditure. The Queen is one of the richest women in the world. It is time she paid her own way, instead of seeking hand-outs from taxpayers. The government should cut the Civil List and put the money saved into welfare projects such as schools, hospitals and pensions."

The demo will be held outside Buckingham Palace from around 10.30 a.m. on Monday 5 July.
Posted by Ian Pindar at 9:50 AM
Labels: monarchy, Public Service