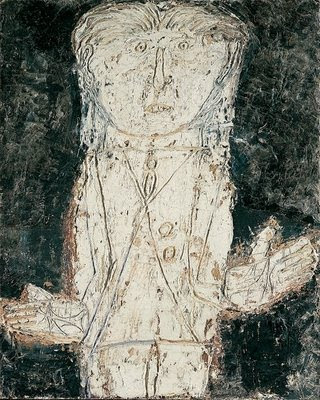 Jean Paulhan by Jean Dubuffet
This new essay collection spans the years 1913 to 1951 and aims to present Jean Paulhan – editor of La Nouvelle Revue Française (1925–40) – as more than just a theorist of language, rhetoric and poetry. Paulhan’s political views, the editors argue, have relevance today, in particular three letters written in 1949. “Letter on Peace” explores the paradox of how a desire to secure peace can lead to war, while in “Letter to the Directors about Europe” Paulhan objects that the Council of Europe “does not resemble Europe in the least”, because it excludes the Soviet Union. Finally, in “Letter to the Directors of the Resistance”, he questions the urge of some résistants to judge, condemn and purge.

As Jennifer Bajorek and Eric Trudel point out in their introduction, Paulhan’s wartime activities were “intensely engagé”. He became a leading member of the literary and publishing arm of the Resistance, cofounding the underground journal Lettres françaises and the clandestine Comité National des Écrivains (or Céné). Yet he was inclined to show clemency towards collaborators. In one of the best texts here, “The Bee”, published pseudonymously in February 1944 in Les Cahiers de la Libération, he writes:

“And we have no qualms – fortunately! – when it comes to telling the truth about the people of Vichy, which is that they are bastards. But we feel a certain solidarity with them all the same. There is, in each of us, a part that – grudgingly – understands them.”

After the Liberation, when Céné drafted a blacklist of collaborationist writers and intellectuals, Paulhan refused to sign it and offered his resignation.

On Poetry and Politics makes a fine companion volume to Paulhan’s most famous book, Les Fleurs de Tarbes, ou, La Terreur dans les lettres (1941), in which he opposed Rhetoric and the arts of language to what he called Terror. In the book under review there is a good summary of this conflict in the essay “Rhetoric Rises from Its Ashes” (1938):

“Hence, on the one side, originality, rebellion, and Terror; on the other, obedience, imitation, respect for rules. The literary paradox is stranger still: it is that Terror’s proofs and arguments are also Rhetoric’s . . . Well, it cannot be both at once. If a cliché sets free the soul, it cannot enslave it at the same time . . . When all is said and done, it is acceptable to take sides.”

Dadaism and surrealism are good examples of Terror in literature, and Paulhan had close ties with these groups (his essay “Jacob Cow the Pirate, or If Words are Signs” (1920) first appeared in Littérature, edited by André Breton). Yet his instinct is to defend and rehabilitate Rhetoric. In fact, it is possible to detect in Paulhan’s work the twin impulses of radical and conservative. He appreciates the Terrorist’s desire not to submit to a dead language, but at the same time he remains nostalgic for an age in which writers sought to achieve their effects in the language rather than against it:

“Sometimes we are surprised that Literature seeks, these days, less coherence and precision than emotion, violence, trembling, with abandon. But doubtless there was a time, which it is up to us to remember, when Literature was quite confident of transforming us without endeavouring so much to move us; when it was too efficacious to have need of an effect. Which is why we can hardly see anything anymore, in all these fits and agitations, but bad conscience over this lost efficacy.”

Paulhan mourns this lost efficacy, while simultaneously undermining it. He is the augurer of a new age (his talk of a “blind spot” towards language anticipating Derrida and de Man) but also a pall-bearer for the old.

As Maurice Blanchot observed, reading Paulhan gives us a “feeling of uneasiness” as we ask ourselves, “Where is this author . . . taking us? Is he not talking about something other than what he was supposed to be saying?” There is a sense that Paulhan’s own texts worked against him. Bajorek and Trudel note that “despite his professed determination not to make the essence or nature of literature into a strict impossibility, every one of his essays on rhetoric and on language follows the same path, in which the result of all this methodical effort and research turns out to be, at the same time and necessarily, its own dismantling or falling short.”

In “The Experience of the Proverb” (1925), describing the challenge of mastering a foreign language, Paulhan complains that “I perhaps knew how to express my thoughts, but not how to impose them.” The same might be said of his essays on Rhetoric and Terror, in which his reluctance to impose a final solution turns out to be his greatest virtue.
Posted by Ian Pindar at 10:02 AM
Labels: from the Times Literary Supplement 16/07/10 No 5598