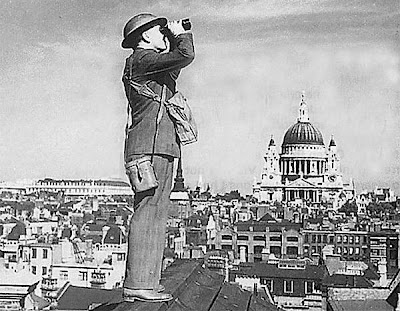 “Why has this war produced no war poets?” Robert Graves asked in a 1941 radio talk. The lack of new Owens or Sassoons to bear witness to the second world war was troubling. How to account for this “absence of poetry”, asks Daniel Swift in this original book. How to explain “the war's apparent resistance to poetry”?

“I can't do a Brooke in a trench,” Dylan Thomas wrote in November 1939, but he didn't have to. During the blitz he became an “unexpected war poet”, writing haunting poems about the victims of the bombings: “Among Those Killed in the Dawn Raid was a Man Aged a Hundred”, “Ceremony after a Fire Raid”, and “A Refusal to Mourn the Death, by Fire, of a Child in London”. In place of the trenches of the western front, Swift argues, the poetry of the second world war found its subject in the image of the “bombed city”.

Swift has struck upon a fascinating area, where poetry, fire and air intermix. “Little Gidding” – “Eliot's great poem of bomb damage” – is all about living in a ruined city. TS Eliot was in London for the worst of the air raids and volunteered as an air-raid warden. He saw the rubble and death. He explained how the lines beginning “Ash on an old man's sleeve” refer to the debris of a bombing raid hanging in the air for hours afterwards. “Then it would slowly descend,” he recalled, “and cover one's sleeves and coat in a fine white ash.”

Virginia Woolf also witnessed the devastation at first hand, visiting her bombed flat in Tavistock Square: “rubble where I wrote so many books”. In her essay “Thoughts on Peace in an Air Raid”, she describes vividly how it feels waiting for a bomb to fall: “during those seconds of suspense all thinking stopped. All feeling, save one dull dread, ceased.” After the raid, “Scraps of poetry return.” (And indeed, during the blitz, sales of poetry soared.)

“No war poetry can be expected from the Royal Air Force,” Graves insisted, and Swift is hard-pressed to prove him wrong. The 1944 anthology Air Force Poetry (“Fetch out no shroud / For Johnny-in-the-cloud”) and the airmen poets he brings to our attention do not greatly inspire. “The poetry of air bombing requires a particular imaginative sympathy absent from other war poetry,” Swift argues. Cecil Day Lewis came close to it in “Airmen Broadcast” (“Speak of the air, you element, you hunters / Who range across the ribbed and shifting sky”). Stephen Spender also tried to become “the poet of bombing” (his “great air-raid poem” being “Responsibility: The Pilots Who Destroyed Germany, Spring 1945”). But in the poetry of bombing Swift detects a problem of distance and scale. In “The Firebombing” (1963), for instance, James Dickey's bomber complains he is “still unable / To get down there or see / What really happened”; whereas in “The Lost Pilot” (1967) James Tate is left with his “head cocked toward the sky”, still searching for his father, a bomber pilot killed over Germany.

Bomber County is a strange beast, “a study of the poetry of a particular historical episode”, intercut with a personal memoir. Swift's grandfather, Squadron Leader James Eric Swift, was killed in action in June 1943 during a raid on Münster. Swift visits his grave in Holland, looks at the cockpit of a Lancaster bomber and goes to Münster, but these sections can be ponderous. It's his evocation of some of our greatest writers wandering through a bombed-out London that really shines, and Swift should be congratulated for undertaking such an intelligent and idiosyncratic project.
Posted by Ian Pindar at 8:05 PM
Labels: from the Guardian: 21.08.10