Not with a Bang but a Whimper 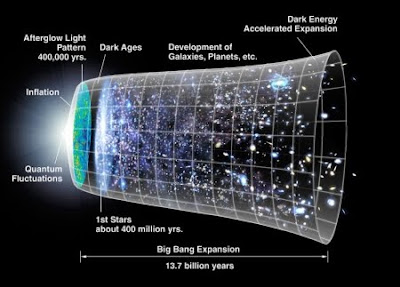 Alvy's mother: He's been depressed. All of a sudden, he can't do anything.
Doctor: Why are you depressed, Alvy?

Alvy's mother: Tell Dr. Flicker. (To the doctor) It's something he read.

Doctor: Something he read, huh?

Alvy's mother: What is that your business? (To the doctor) He stopped doing his homework.

Alvy's mother: What has the universe got to do with it? You're here in Brooklyn. Brooklyn is not expanding.

Doctor: It won't be expanding for billions of years, yet Alvy. And we've got to try to enjoy ourselves while we're here, huh, huh? Ha, ha, ha.


I’ve often wondered if the universe is finite or infinite (bear with me). I have to say I tended towards the finite position, assuming the universe would eventually collapse, obliterating itself in a Big Crunch. I’m glad I didn’t put any money on it (?), because my instinct was wrong.

It seems the universe will continue to expand for ever, sliding inexorably towards a state of degeneration. The stars will go out (taking with them any life forms in their vicinity) and the universe will become ‘a cold, dead wasteland’.
This places the poet in an interesting position. No poet can write in the hope of immortality any more. The poet can now be absolutely certain that his or her descendants – indeed, entire species – will eventually die, taking with them any appreciable audience for poetry. We can now be absolutely certain of the finite existence of intelligent life (and therefore poetry) in the universe.
In The Last Three Minutes: Conjectures about the Ultimate Fate of the Universe (Weidenfeld & Nicolson, 1994) Professor Paul Davies speculates that our descendants might experiment with cybernetics and nanotechnology – to the extent that we might not actually recognise them as anything like ourselves.

But supposing these future beings manage to escape our solar system before the Sun implodes, and then go on to colonise other planets – and indeed they keep hopping from solar system to solar system as the universe gets progressively colder and darker all around them – even supposing these humanoid life forms survive for that long – will they still be reading poetry, let alone poetry written billions of years ago in a dead language (probably)?

Or perhaps the human race will die, but intelligent alien species will survive far into the universe’s cold, dark future. Will they bother to read ancient human poetry? They’ll have their own poets to attend to, perhaps. Human poetry would be a curio.

Assuming the universe does continue to expand forever, Professor Davies envisages ‘bizarre science-fiction creatures eking out an existence against odds that become stacked forever higher against them, testing their ingenuity against the inexorable logic of the second law of thermodynamics.’


Not marble, nor the gilded monuments
Of princes, shall outlive this pow’rful rhyme,
But you shall shine more bright in these contents
Than unswept stone, besmeared with sluttish time.
When wasteful war shall statues overturn,
And broils root out the work of masonry,
Nor Mars his sword nor war’s quick fire shall burn
The living record of your memory.
’Gainst death and all oblivious enmity
Shall you pace forth; your praise shall still find room
Even in the eyes of all posterity
That wear this world out to the ending doom.
So, till the judgment that yourself arise,
You live in this, and dwell in lovers’ eyes.