The Three Emperors: Three Cousins, Three Empires and the Road to World War One, by Miranda Carter (Penguin) 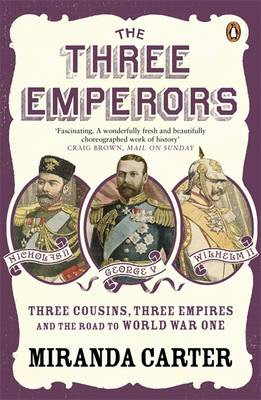 “My thoughts are with you and I shall always remain your true and devoted friend,” George V wrote to his cousin the ex-Tsar Nicholas II in 1917 after the Russian revolution. However, when the king’s prime minister Lloyd George offered Nicholas sanctuary, the palace objected that “the residence in this country of the ex-Emperor and Empress would be strongly resented by the public, and would undoubtedly compromise the position of the King and Queen”. Nicholas was hastily disinvited. The Saxe-Coburg-Gothas (or Windsors, as they now called themselves) survived and the Romanovs were slaughtered in a basement. Miranda Carter skilfully weaves together the lives of the three cousins – George V, Nicholas II and the insecure Kaiser Wilhelm II of Germany – and shows how these dysfunctional men led their nations into conflict. The bloodlines of Europe’s royal families were supposed to keep the peace, forming an indissoluble bond, but in this intelligent and enjoyable history Carter reveals how they were tested to destruction by events.
Posted by Ian Pindar at 10:14 AM
Labels: from the guardian: 31.07.10