A History of Christianity: The First Three Thousand Years, by Diarmaid MacCulloch (Penguin) 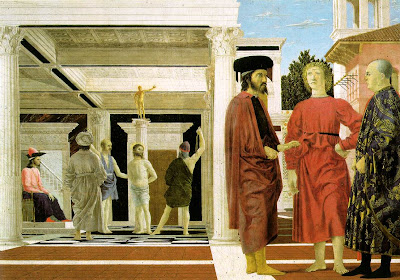 The Flagellation by Piero della Francesca (c.1455–60)
Christianity began a thousand years before the birth of “Joshua the Anointed One” (aka Jesus Christ), argues MacCulloch in this gargantuan tome, which is why he starts with classical and Hebrew culture, audaciously adding another millennium to Christian history. Originally, he says, Christianity was “a dialogue between Judaism and Graeco-Roman philosophy, trying to solve such problems as how a human being might also be God”. A “candid friend of Christianity”, MacCulloch’s aim is to step back and see it “in the round” and in this he succeeds magnificently. Concerned about the “moral health” of Christians (“For most of its existence, Christianity has been the most intolerant of world faiths”), he shows how 19th- and 20th-century Christians created “a reaction of fundamentalist intolerance” in Islam, Judaism and Hinduism. Huge areas of Christian history are covered, but his main theme is the sheer variety of ways in which one can be a Christian. He presents us with a plurality of Christianities, but through all this diversity, MacCulloch brings a singular clarity.
Posted by Ian Pindar at 2:00 PM
Labels: from the guardian: 18.09.10