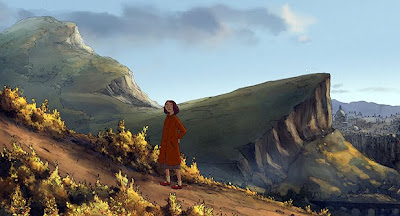 I saw Sylvain Chomet’s The Illusionist on Sunday and enjoyed it immensely, but don’t expect the surreal escapades of Belleville Rendez-Vous. This is essentially a Jacques Tati film with a slow-paced, gentle humour. Much of it is set in a lovingly depicted Edinburgh, which looks very beautiful, even with the constant rain. At one point near the end of the film, after Tatischeff makes a gesture on a hillside (the precise nature of which I’ll not reveal), the camera sweeps around Edinburgh, the movement of the camera (and the soundtrack) carrying much of the emotion of the scene. It’s hard to explain without seeing it, but it was breathtaking. A nice use of computers combined with an eccentric, hand-drawn aesthetic. I’m sure there were lots of details I missed, but I did notice the Edinburgh pawnbroker’s shop was called . . . Brown and Blair.
Posted by Ian Pindar at 2:04 PM
Labels: chomet, film, tati