The Pantomime Life of Joseph Grimaldi: Laughter, Madness and the Story of Britain’s Greatest Comedian, by Andrew McConnell Stott (Canongate) 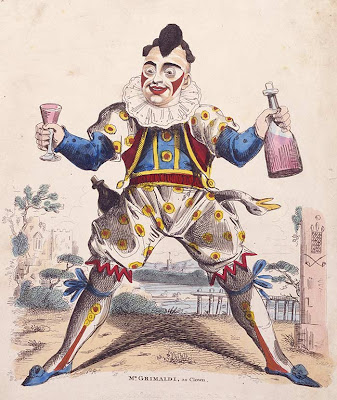 Hancock, Milligan, Cleese – depression and comedy have long been associated, but according to McConnell Stott in this lively biography “Grimaldi brought into culture the figure of the sad comedian, the solitary being whose disproportionate talent to provoke laughter is born of a troubled soul.” Grimaldi also came up with the classic clown make-up and baggy clothes, his character, “Joey the Clown”, being a “cunning, covetous and childlike . . . uncensored mass of appetites”. It was a life of frequent tragedy: Grimaldi’s first wife died in childbirth, his alcoholic son (also a clown) died aged 21, and the leaps and falls that delighted Grimaldi’s audiences left him crippled. Nevertheless, he was admired by Byron, Hazlitt and Dickens, who edited his memoirs after his death, and some 2,000 people watched his last performance in 1829, even though he could barely move. Stott includes the full text of Grimaldi's greatest triumph Harlequin and Mother Goose (1806), although it only proves his point that comedy is “an untranscribable art”.
Posted by Ian Pindar at 10:45 AM
Labels: from the guardian: 04/09.10