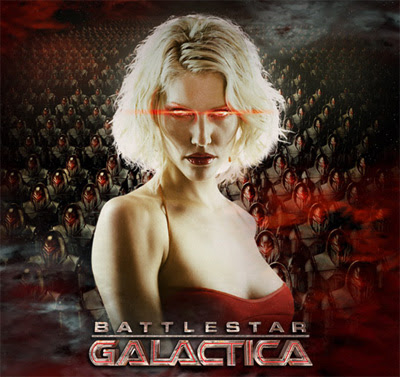 Finally, I watched the last episode of the final season of Battlestar Galactica (the reimagined TV series from 2003 to 2009, not the 1970s series). If you value your time, do not buy the three-hour miniseries that began it all or you will be sucked in and become an addict. Addiction is the only way to describe it, I think.
Endings are hard to get right on long-running series, and as the Lost finale demonstrated, the writers can sometimes get it hopelessly wrong, ruining any lingering respect one might have had for the show. Thankfully, this is not how I felt at the end of Battlestar Galactica. The writers got it about as right as they ever could, I think, given the complexity of the plot.
Battlestar Galactica never made it to terrestrial TV in the UK and people raise their eyebrows when I tell them it is magnificent television. But don’t take my word for it. I first took notice of the show because of Ron Silliman’s enthusiastic posts, comments such as “Battlestar Galactica was not only the best sci-fi program ever on television, one could argue that it was the most well-conceived, written & acted series in US TV history. Using the hokey old premise of robots-turn-on-man & the idea of a displaced civilization in search of a home, they produced the TV equivalent of King Lear. Or Moby Dick.”
But be warned, if you are tempted to read Ron’s blog: there are spoilers aplenty in his later posts, and one of the great pleasures of Battlestar Galactica is never knowing what will happen next . . . And yes, I am aware there's a prequel, Caprica, but I really need to get my life back!
Posted by Ian Pindar at 4:04 PM
Labels: battlestar galactica, too much TV