Finnegans Wake and the Nazis 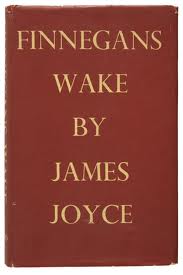 Sylvia Beach, the American owner of the Paris bookshop Shakespeare and Company, recalls life under Nazi occupation in 1941:


“My German customers were always rare, but of course after I was classified as ‘the enemy’ [when America entered the war], they stopped coming altogether – until a last outstanding visit ended the series. A high-ranking German officer, who had got out of a huge grey military car, stopped to look at a copy of Finnegans Wake that was in the window.” The officer came into the shop and said to Sylvia in fluent English, “I want that copy of Finnegans Wake you’ve got in the window.” She recalled the encounter in an interview: “‘Well,’ I said, ‘that’s the only copy left in Paris, and you can’t have it . . . You don’t understand that anyhow. You don’t know Joyce.’ And he said, ‘But we admire James Joyce very much in Germany.’ He was very angry, and he went out and got into his great car, his great military car, surrounded with other fellows in helmets, and drove away.” [. . .]

Then, just after Christmas, the Wehrmacht officer who had demanded Sylvia’s copy of Finnegans Wake returned.

“He came back in about ten days, and he said, ‘Your copy of Finnegans Wake is gone from the window. What did you do with it?’ I said, ‘I’ve put it away. It’s for me.’ He was so furious. He said, ‘Well, you know, we’re coming this afternoon to confiscate all your goods.’ I said, ‘Very well. Do so.’ And he said, ‘Now will you sell Finnegans Wake?’ And I said, ‘Not at all. Come along.’ So, he disappeared in a rage, booming down the street. [. . .] I immediately had everything removed from my shop. In about two hours, there wasn’t a book left in it, not only Finnegans Wake but everything else disappeared. [. . .] I had the name Shakespeare and Company painted off the front by the house painters, who lived in the house. And the carpenters took down the shelves even. Everything was removed. And the shutters were up. The Germans must have come and saw nothing, nothing left at all. And I retired upstairs.”

Thanks parrish lantern. Like your blog. Incidentally, I edited Jay Rubin's Haruki Murakami and the Music of Words -- and I copy-edited Hitomi Kanehara's Autofiction. Weird.

I must first apologize: for my absurd tardiness to this post; for my uninvited entrance into the blog; for my ignorance of the blogger, blogging community. I am but a stranger to these parts, and horribly out of time. I was merely researching Joyce and stumbled here out of the rabbit hole that is the internet.

Forgive me if I assume either correctly or incorrectly that the narrative of Sylvia and the Nazi in this post conforms to the current mainstream interpretation of those times and circumstances. Which is to say that based off probability I must generalize and assume this community is one which views the anecdote in the simplistic, black and white dichotomy of the current mainstream narrative, i.e. "Entitled Nazi Baddie vs. Innocent American Patroness Goody."

Whatever the case may be, to me it seems that, if anything, the antagonist in this "tale", is clearly Sylvia. Though the Nazi was a bit too temperamental and over-reactive in the second half of the story, he nevertheless entered into the interaction without preconcieved notions or prejudices. 'The Nazi' seemed open, unassuming and even-keeled at first. He merely stepped into the bookshop as a reader, a potential customer and a neighbor to Sylvia--NOT as a German, a Nazi, a high ranking officer or the man with the gun and all the power. Judging by this anecdote alone, he acted as a universal neighbor and not a stranger: very Joycean indeed! The same cannot be said of Sylvia.

*{People who understand the history of that time know that the current reputation or perspective towards the average Nazi soldier was not the same back then-- it was not so clear cut as it seems now. Also, to most observant citizens, the causes and influences of WWII were confusing and unclear, even with all the propaganda of the time. Therefore I don't think her snap judgement, and her behavior can be justified based on her observance of a uniform or nationality. I guess its as they say, Hindsight is 20/20, and I'd add that oftentimes its even better! Oh how many of us depict ourselves in hindsight as gifted with extraordinary prophetic ethical senses and supernatural moral intuition (able to sniff out the truth with just one interaction!)...}

Quite frankly, I question the honesty and integrity of the last part. Though I have no idea whether or not Sylvia actually took such extreme measures to "hide" her books etc. I highly doubt the Germans went through with any plan to "rob" the place or to punish Sylvia in the night. Despite depictions in hollywood, and other postwar media, in reality such brutal and petty actions by the German army was VERY rare. Sylvia merely states "...the Germans MUST HAVE COME saw nothing..." and this is hardly a statement of certainty or proper conviction. And anyway, if they were such horrible brutes, why not just burn the entire place down anyway for good measure and because, you know, they were baddies trying to conquer the world and destroy as much of it as possible...