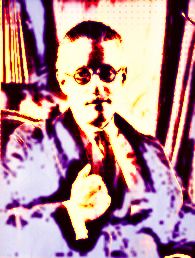 Bloom was talking and talking with John Wyse and he quite excited with his dunducketymudcoloured mug on him and his old plumeyes rolling about.


― Persecution, says he, all the history of the world is full of it. Perpetuating national hatred among nations.


― But do you know what a nation means? says John Wyse.


― A nation? says Bloom. A nation is the same people living in the same place.


― By God, then, says Ned, laughing, if that’s so I’m a nation for living in the same place for the past five years.


So of course everyone had a laugh at Bloom and says he, trying to muck out of it:


― Or also living in different places.


― What is your nation if I may ask, says the citizen.


The citizen said nothing only cleared the spit out of his gullet and, gob, he spat a Red bank oyster out of him right in the corner.