So farewell, then, Harry Patch . . . Thus far, I have yet to see or hear a news report that mentions what Mr Patch really thought about war.
"I felt then, as I feel now, that the politicians who took us to war should have been given the guns and told to settle their differences themselves," he said in The Last Fighting Tommy, "instead of organising nothing better than legalised mass murder."
Sentiments the Prime Minister and the royal family oddly ignored in their TV tributes.
Here's my review of The Last Fighting Tommy: The Life of Harry Patch, the Oldest Surviving Veteran of the Trenches from June last year.
Posted by Ian Pindar at 1:47 PM No comments:
Labels: RIP

Defeat: Why They Lost Iraq, by Jonathan Steele

What if the US had withdrawn from Iraq a year after invading? asks Steele. There would have been no armed insurgency, he argues; Iraq's political class would have formed a real - not a puppet - government, and countless lives would have been saved. Occupiers are always unwelcome, and while reporting from Iraq between 2003 and 2008 for this newspaper, Steele watched a gulf open up between Iraqis and the occupation forces. This excellent book explains why, filling in a back-history of smouldering resentment towards foreign invaders that the White House and Downing Street stubbornly ignored. "If an inquiry into the quality of the British government's pre-war analysis is ever held," he writes, "the results of my interviews with senior officials suggest it will uncover grave lapses, both at expert level and by the prime minister and his staff." Tony Blair's "blithe self-confidence" is everywhere attested to - "a weird mixture of total cynicism and moral fervour". At the Iraq inquiry, let's hope he testifies under oath and in public.
Posted by Ian Pindar at 11:05 AM No comments:
Labels: from the Guardian: 25/07/09

1948: A History of the First Arab-Israeli War, by Benny Morris

There was a time when revisionist historian Benny Morris was unemployable because of his supposed pro-Palestinian bias. Now he is a professor at Israel's Ben-Gurion University, and last year this book won the National Jewish book award. What happened? In part, Morris and other New Historians reshaped Israelis' understanding of their past. But Morris has changed, too, and today he is a disappointed liberal Zionist. In this impressive military history, written with admirable clarity, he remains sympathetic to the Palestinian Arabs expelled from their homeland, but adopts a harsher tone towards political Islam - what he calls "the jihadi impulse" underlying Arab hostility towards Jews and Zionism, a religious intolerance, signs of which he detects in 1948. The first Arab-Israeli war was not simply a nationalist war over territory but a war of religion, he now claims. Consequently, he is bleak about any possibility of reconciliation for as long as the Arab world remains unstable, oscillating "between culturally self-effacing westernisation and religious fundamentalism".
Posted by Ian Pindar at 11:03 AM No comments:
Labels: from the Guardian: 25/07/09 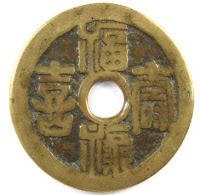 I am pleased to announce that I have received the Arthur Welton Award to assist materially in the composition of my third poetry collection.

OK, so my first two collections have yet to be published, but I’m grateful to the Arthur Welton Foundation – and the Society of Authors – for this act of faith.
Wealthy benefactors can make donations to the Foundation here.

The image above is the obverse of a Chinese poem coin, btw, the four-character inscription of which means "good fortune, emolument (official salary), longevity and happiness".
Posted by Ian Pindar at 8:58 PM No comments:
Labels: funds, PNR

We Danced All Night: A Social History of Britain Between the Wars, by Martin Pugh

The British left was out of power for most of the period covered by this book -- 1918 to 1939 -- but as Martin Pugh points out, it dominated the literary and cultural scene, with works such as George Orwell's The Road to Wigan Pier shaping our perception of the era. Yet as this revisionist history shows, it wasn't all doom and gloom (provided you didn't work in industry or agriculture). Many people saw their disposable income rise, and during the interwar period we became a nation of "obsessive consumers". Orwell described the age as "restless", and so is Pugh as he examines in detail every aspect of the times, public and private. It's an impressive performance. This was an era in which women had more freedom than ever before, although divorce was difficult and infidelity indulged ("Men get these attacks like kiddies get measles," advised Woman's Own). The first world war politicised people and, quietly, in the wings, the main political trend of the time was the rise of the Labour party, preparing the way for the electoral landslide of 1945.
Posted by Ian Pindar at 3:34 PM No comments:
Labels: from the Guardian: 11/07/09

The Red Prince: The Fall of a Dynasty and the Rise of Modern Europe, by Timothy Snyder

In the interwar years Archduke Wilhelm von Habsburg (1895-1947), the subject of this biography, frequented homosexual brothels in Paris, having lost his dream of becoming king of Ukraine with that nation's dissolution in 1921. This is an engaging portrait of a little-known and puzzling character. Wilhelm was a "cosmopolitan fascist" (before Nazism made a blood cult of nationalism), but also a "monarchist of the left", adopting the hammer and sickle emblem and confusing everyone by promising much the same as the Bolsheviks. Ukrainians seem to have genuinely loved their dashing Red Prince, who wore a peasant shirt under his uniform. Snyder, who has a talent for startling observations ("Every national revolution, like every bout of lovemaking, owes something to the one that came before"), tells the story of how a seemingly timeless European dynasty sought an accommodation with the rising tide of nationalism, and lost, while reminding us that monarchy was once a serious rival to totalitarianism. Wilhelm was eventually captured and died in a Soviet prison.
Posted by Ian Pindar at 3:31 PM No comments:
Labels: from the Guardian: 11/07/09

Congratulations to Philip Hoare, who has won this year's Samuel Johnson Prize for his idiosyncratic book on whales. Here's what I said about it in the Guardian in September last year.
Posted by Ian Pindar at 8:39 PM No comments:
Labels: Samuel Johnson Prize
Newer Posts Older Posts Home
Subscribe to: Posts (Atom)