From Fatwa to Jihad: The Rushdie Affair and Its Legacy, by Kenan Malik 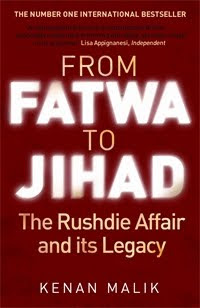 Is it morally unacceptable to give offence? asks Kenan Malik in this important book. The British Muslims who burned Salman Rushdie’s The Satanic Verses in 1989 couldn’t prevent its publication, says Malik, but they did succeed in “pounding into the liberal consciousness the belief that to give offence was a morally despicable act”. The proclamation of a fatwa on Rushdie was largely a “political tactic”, Malik argues, but today “the fatwa has become internalised”, creating a culture of self-censorship that has profoundly affected British life. As Hanif Kureishi is quoted as saying: “Nobody would have the balls today to write The Satanic Verses, let alone publish it. Writing now is timid because writers are terrified.” Malik also argues that the policies of multiculturalism created for militant Islam “a space within British Muslim communities that had not existed before”. In his view, Margaret Thatcher and the Foreign Office mishandled the Rushdie affair, trying to placate radical Muslims while expressing irritation with Rushdie, and failing to defend the Enlightenment values of liberty, freedom and democracy.
Posted by Ian Pindar at 4:31 PM
Labels: from the Guardian: 23.01.10