Power 2010 is an interesting response to the current mood of political disaffection in Britain.

After more than 100,000 votes, the POWER Pledge looks like this:

1) Introduce a proportional voting system.
2) Scrap ID cards and roll back the database state.
3) Replace the House of Lords with an elected chamber.
4) Allow only English MPs to vote on English laws.
5) Draw up a written constitution.

If these strike you as reasonable aims (1, 3 and 5 are surely long overdue), then why not sign the pledge? This kind of web democracy only works – i.e. sends a powerful message to our elected representatives – if enough people take part.
Posted by Ian Pindar at 12:01 PM No comments:
Labels: democracy

Worse Than War: Genocide, Eliminationism and the Ongoing Assault on Humanity by Daniel Jonah Goldhagen 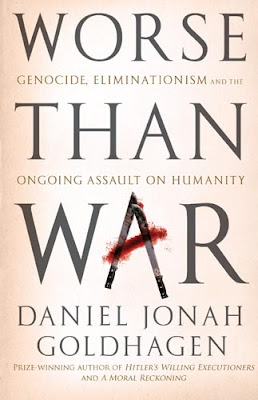 The literature of mass murder is riddled with clichés, says Daniel Goldhagen in this disturbing and impassioned study. Mass murder is not impersonal or beyond human control; it is not an expression of "human nature" or inevitable. Nor do people slaughter others out of blind obedience to authority. The perpetrators of genocide are not born killers, nor are we all potential mass murderers. And free will is not an illusion.

As Goldhagen's controversial ­bestseller Hitler's Willing Executioners (1996) revealed, given the same set of external forces, some Germans chose to kill, others did not. And there was no coercion: "During the Holocaust, no German perpetrator was ever killed, sent to a concentration camp, imprisoned, or punished in any serious way for refusing to kill Jews." The perpetrators of the many grisly acts described here – in Darfur, Germany, Iraq, Kenya, Rwanda, the former ­Yugoslavia and elsewhere – showed a willingness to kill, a satisfaction and enjoyment in killing, because they had no doubt that their unspeakable deeds were right and necessary. But how were these ordinary people persuaded to butcher their neighbours?

The answer is: politics. "The history of our time suggests that eliminationism is actually integral to politics," says Goldhagen, for whom "mass murder is a political act". Politicians create the conditions for mass slaughter. "Mass elimination is always preventable and always results from conscious political choice." Far from occurring in a frenzy of bloodlust, such atrocities are usually the result of "orders and meetings", and the decisions of a handful of powerful people. "There is no mass murder or elimination I know that could not have been avoided had one person or a few people decided to do otherwise, which they easily could have done."

What is most striking about accounts of genocide, Goldhagen observes, is the "absence of incomprehension" among the perpetrators when the killing begins. The violence has been prepared for well in advance. Politicians mobilise others into killing by tapping into latent prejudices and simmering hatreds (often resorting to dehumanising and demonising ­caricatures) to create "supportive eliminationist milieus". Hence the mocking joyfulness of much mass murder. As one Hutu murderer said: "We knew full well what had to be done, and we set to doing it without flinching because it seemed like the perfect solution."

The language we use is crucial, says Goldhagen, who equates linguistic accuracy with moral rectitude. He wants to banish the euphemism "ethnic cleansing", as well as the most "infamous euphemism" of all, the "final solution". "Suicide bombing" is more properly "genocide bombing", he says, while "crimes against humanity" should be replaced with the much stronger "war against humanity". "Eliminationism" is also preferable to "genocide", he argues, because as well as meaning mass extermination it also includes repression and the destruction of a group's identity, as well as the expulsion of others and measures to prevent them from reproducing.

Worse Than War is overlong and repetitive, and, having explained in great depth the overwhelming nature of the problem, it is perhaps inevitable that Goldhagen's solutions seem inadequate. He directs much of his ire at the United Nations, which he accuses of neglect, inaction and "total cynicism", because it is fundamentally corrupt and undemocratic. "The genocide convention and the United Nations do more to provide cover for mass murderers than to stop them," he complains. Mass murderers have a sense of impunity from international intervention, let alone punishment, he maintains, and he wants them to know that they will face imprisonment or even execution if they set out to exterminate other groups or peoples. He would like to see bounties on their heads, and supports the hawkish project of "transforming ­tyrannies into democracies".

The establishment of a democratic alternative to the United Nations sounds fine in principle (though perhaps it places too much faith in democracy), but it is hard to envisage how it would come into being. And even if Goldhagen's United Democratic Nations imposed a total economic embargo on eliminationist regimes, countries outside the UDN would happily continue to trade.
Goldhagen also has one significant blind spot. Undoubtedly, Israel is the target of eliminationist antisemitism, but it is disingenuous of him not to mention its treatment of the Palestinian Arabs. Nevertheless, given his extensive knowledge of Nazi history, Goldhagen's statement that "Political Islam resembles Nazism in its murderousness" deserves cautious consideration. "Political Islam is currently the one expressly, publicly, and unabashedly genocidal major political movement," he concludes, "a culture, even cult, of death."

Goldhagen's resolve to push eliminationism to centre stage should be applauded. For all its faults, Worse Than War is a powerful and affecting study of man's inhumanity to man (and woman and child). Its main message is that it is within our power to prevent and stop genocide, provided we accept the need for aggressive intervention to punish murderous regimes and halt the bloodshed.
Posted by Ian Pindar at 9:18 PM No comments:
Labels: from the Guardian: 06.02.10
Newer Posts Older Posts Home
Subscribe to: Posts (Atom)