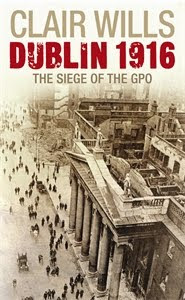 “Did that play of mine send out / Certain men the English shot?” Yeats wondered after the 1916 Rising. Quite probably, says Clair Wills in this excellent cultural history that gives due emphasis to “the literary elements of the Rising – the staged drama at the GPO, the impetus for rebellion found in the theatre of the cultural revival, the poetic manifestoes”. Yeats’s “Easter 1916” was too equivocal for some, but Irish “Rising verse” flourished after the brave rebel leaders had been summarily executed by the British. In the north all memory of the Rising has been suppressed, Wills notes, while in the south an authorised version of events prevails. The Easter Rising became a symbol of Irishness (most evident in the availability of “Rising kitsch”), but also an inspiration. “The Easter week rising in Ireland by its very failure attracted,” Jawaharlal Nehru observed. “For was that not true courage which mocked at almost certain failure and proclaimed to the world that no physical might could crush the invincible spirit of a nation?”
Posted by Ian Pindar at 4:01 PM
Labels: from the Guardian: 17.04.10