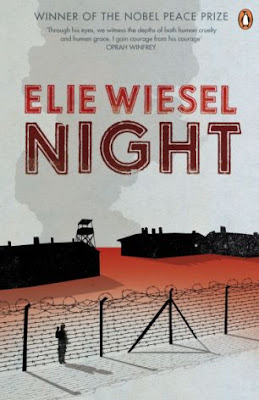 I travelled a lot by train over Easter and read Elie Wiesel’s Night.
It differs from, say, Primo Levi’s If This is a Man (to which it is often compared) in that Wiesel is not alone in Auschwitz. He is accompanied by his father. The father-son dynamic. Is the son in need of the father’s protection or the father the son’s?

At the heart of Night is the question “For God’s sake, where is God?”
At one point the SS hang two men and a boy in front of the inmates, who are made to file past them:

The two men were no longer alive. Their tongues were hanging out, swollen
and bluish. But the third rope was still moving: the child, too light, was still
breathing . . . and so he remained for more than half an hour, lingering between
life and death, writhing before our eyes. And we were forced to look at him at
close range. He was still alive when I passed him. His tongue was still red, his
eyes not yet extinguished.

Behind me, I heard the same man asking: “For God’s sake, where is God?”

And from within me, I heard a voice answer:

It reminded me of those devastating lines from Celan's "Es war Erde in ihnen" ("There was earth inside them"):

Somehow these musings have combined with Samuel Beckett’s Molloy, which I have been listening to every evening, in particular the relationship between the stern paternalist Moran and his son Jacques in the second part. “I am done for,” says Moran. “My son too. All unsuspecting. He must think he’s on the threshold of life, of real life.”
Beckett was born on Good Friday 1906 (“You first saw the light of day on the day Christ died”, Company).
Molloy (1951) and Wiesel’s masterpiece (1958) share the same French publisher – probably my favourite publisher (they also publish Deleuze and Guattari) – Les Éditions de Minuit, founded during the Occupation.
Posted by Ian Pindar at 8:36 PM
Labels: Beckett, easter. god, wiesel