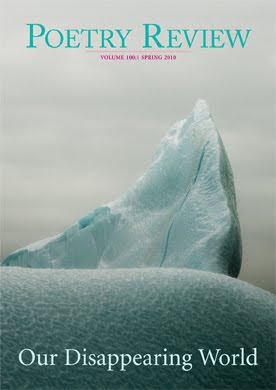 To the British Library last night for the launch of the spring issue of Poetry Review (100:1 Spring 2010), which features the National Poetry Competition winning poems.
Glyn Maxwell was there to present Maitreyabandhu with the Geoffrey Dearmer Prize 2009, which is given annually to the best Poetry Review poem written by a poet who doesn't yet have a book.
Maitreyabandhu lives and works at the London Buddhist Centre. He told me he had just emerged from a rather fraught and unpleasant meeting at the Centre when an e-mail appeared in his inbox telling him he'd won the Geoffrey Dearmer Prize. That put a smile on his face.
So there you have it, even Buddhists have fraught meetings.
Posted by Ian Pindar at 12:02 PM
Labels: National Poetry Competition