A PURE SYSTEM OF SPASMS 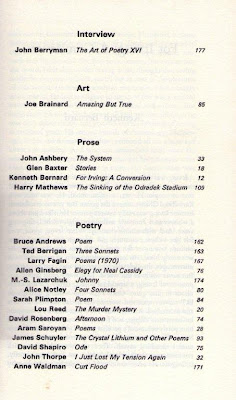 In London last week I picked up this copy of The Paris Review (Winter 1972) for £1 in Any Amount of Books on the Charing Cross Road.

It struck me as an exceptional issue, featuring:

· an interview with John Berryman (who committed suicide in January 1972), in which he is asked: ‘What about Eliot? You must have had to reckon with Eliot in one way or another, positively or negatively.’

Berryman: My relationship with Eliot was highly ambiguous. In the first place, I refused to meet him on three occasions in England, and I think I mentioned this in one of the poems I wrote last spring. I had to fight shy of Eliot. There was a certain amount of hostility in it, too. I only began to appreciate Eliot much later, after I was secure in my own style. I now rate him very high. I think he is one of the greatest poets who ever lived. Only sporadically good. What he would do – he would collect himself and write a masterpiece, then relax for several years writing prose, earning a living, and so forth; then he’d collect himself and write another masterpiece, very different from the first, and so on. He did this about five times, and after the Four Quartets he lived on for twenty years. Wrote absolutely nothing. It’s a very strange career. Very – a pure system of spasms. My career is like that. It is horribly like that. But I feel a deep sympathy, admiration, and even love for Eliot over all the recent decades.

· Joe Brainard’s Amazing But True: ‘A Portfolio of Visual Works’ 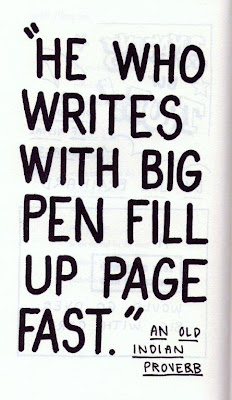 · John Ashbery’s ‘The System’, probably the most important poem in Three Poems (and if you don’t believe me, see David Herd’s John Ashbery and American Poetry (pp.134-7)

· A long poem by Lou Reed of the Velvet Underground – here’s a stanza:

Mister Moonlight
succulent smooth and gorgeous
isn’t it nice
we’re
number one and so forth
isn’t it sweet, being unique

It’s a strong contents list – but is it just me or is it more experimental than anything we’re offered today (and not just by The Paris Review*)? The crazy energy has gone.

*Though it’s good to see Schuyler in the current issue.
Posted by Ian Pindar at 11:07 AM
Labels: Ashbery, paris review

Good write-up. I definitely love this site. Keep it up