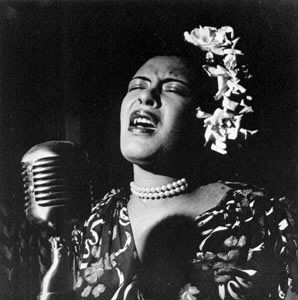 Waldron accompanied Holiday in her last years, and I’ve been looking for a recording. At Newport gives us a good idea of what O’Hara heard at the 5 SPOT. The track that stays with me is ‘Lady Sings the Blues’. A woozy-sounding Holiday, accompanied by Waldron, sings as if the blues really are a life sentence, and the song teeters on the edge of collapse. It is crushingly bleak and utterly magnificent.


*
I’ve been reading a lot of Henri Michaux lately for a piece I’m writing, and I was struck by Le jardin exalté (variously translated as The Exalted/Heavenly Garden). It begins with Michaux taking a small dose of some drug with some friends. Somebody puts on some music.

A record. A Lied was put on, then taken off again. I did not want to be given a European impetus, and certainly not one from that era.

[This is understandable, especially when one remembers that Michaux was in France during the Occupation. In fact, David Ball in his excellent anthology Darkness Moves, suggests that the text ‘Les Nonais et les Oliabaires’ (‘The Nonese and the Olibarians’), although written in 1936, ‘gives an excellent account of the French and their German masters during the Occupation (1940-1944) . . . or perhaps it is an allegory of the South African blacks and their white government in the 1980s.’ If you get a chance, do read ‘The Nonese and the Olibarians’. It is chilling and just, well, utterly stunning. But back to Le jardin exalté:]

Then came another record, this time of Carnatic music. The first notes, at once of unprecedented importance, were, as it seemed, struck within the ear itself. A music never before heard so close. It took us up as it passed. This was the inward power of India, further intensified; it brought with it pre-eminence, reached for grandeur, came also with fervour, with an impersonal fervour.

As water advances in the bed of a river, likewise the music advanced in the bed of my being, and with it came a tide of fullness, and the longing to be filled.

If you want to know the sort of music Michaux was listening to (as did I), I highly recommend Music of Southern India, performed by the brilliant Rang Puhar Carnatic Group. I've been listening to it all week.

As Michaux observes in A Barbarian in Asia (1933): “I exulted in the great multiform, living challenge of the Asiatic peoples to our terrible Western monotony. Long live the last resistants!”
Posted by Ian Pindar at 8:12 PM
Labels: billie holiday, carnatic, frank o'hara, india, michaux