The Secret Lives of Buildings: From the Parthenon to the Vegas Strip in Thirteen Stories, by Edward Hollis (Portobello) 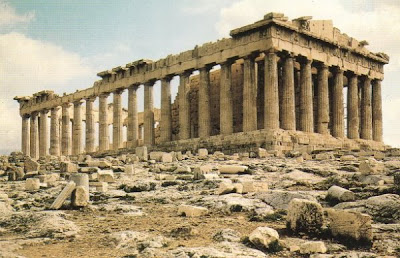 Buildings are transient things, Edward Hollis writes, they “shapeshift from century to century”, but we still yearn for them to be symbols of immutability. The Parthenon, for instance, has been ruined several times and its “walls defac’d [and] mouldering shrines remov’d / By British hands” (as Byron has it, objecting to Lord Elgin’s vandalism), yet today it is destined to become a painstakingly restored ruin for tourists to photograph. Tourists have taken possession of the architectural past, even the recent past, the Berlin wall becoming “a quarry of souvenir chips”. Throughout this stylish book Hollis shows how the buildings we think we know are more often than not reconstructions or recreations (Notre Dame de Paris, for instance, has been almost completely rebuilt), and how the use we have for buildings changes over time (so Gloucester cathedral is now Hogwarts in the Harry Potter films). Perhaps in the end, Hollis concludes, a building like the Parthenon will always survive as an image of perfection – in a snow globe or on a tea towel.
Posted by Ian Pindar at 10:43 AM
Labels: from the guardian: 18.09.10