The Eitingons: A Twentieth-Century Story, by Mary-Kay Wilmers (Faber) 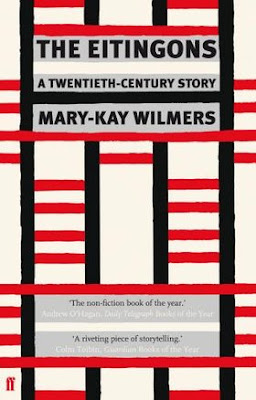 Much of this beautifully written family memoir concerns Leonid Eitingon (1899–1981), a terrifying figure who joined the Cheka in 1920 and later went about enthusiastically “liquidating” Stalin’s enemies, even helping to organise Trotsky's murder. More palatable, perhaps, are Max (1881–1943) and Motty (1885–1956). A Zionist psychoanalyst, Max befriended Sigmund Freud (although Jung called Max “an impotent gasbag”) and he established an institute of psychoanalysis in Palestine in the 1930s; Motty became a multimillionaire by importing furs to the US in the 40s. But were the FBI’s doubts about Motty simply cold war paranoia? And was Max involved in the kidnapping of a White Russian general? Plenty of questions remain unanswered, but Mary-Kay Wilmers, the editor of the London Review of Books, makes a virtue of this uncertainty as she investigates her mother’s family. It is the journey rather than the destination that matters. This enjoyable book is a little like an LRB article: leisurely, knowledgeable, full of fascinating nuggets and a tad overlong.
Posted by Ian Pindar at 10:46 AM
Labels: from the guardian: 30.10.10