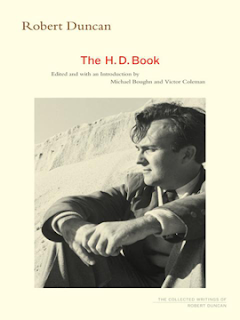 My review of Robert Duncan's The H.D. Book is in this week's Times Literary Supplement (print only). Here's a little taster to whet your appetite (the long quote is from The H.D. Book):

According to Duncan, the New Criticism is a conspiracy of protestant schoolmen to “exorcize” the magic of poetry.

In the literary establishment Eliot had won the day – he had, indeed, designed that literary establishment in his essays; and H.D., along with Lawrence and even Pound . . . belonged with those who had departed from what reasonable men consider of concern and had lusted after strange gods . . . The concept of a revealed poetry was not in tune with the mode of the great literary reviews of the forties. The new critics were partisans of what they called the rational imagination . . . ‘Inspiration’, ‘spell’, ‘rapture’ – the constant terms of The War Trilogy – are not accepted virtues in the classroom, where Dream or Vision are disruptive of a student’s attentions . . . The War Trilogy was not written, any more than Paterson or The Pisan Cantos were, for classrooms, anthologies, or the new reviews.

Although elsewhere he acknowledges T. S. Eliot as one of his “old masters”, Duncan largely disparages him in The H.D. Book. The Waste Land he describes as a “period charade”, while Williams's Spring and All is “the spring of a new poetics”. Williams declared The Waste Land “the great catastrophe to our letters”, and Eliot ensured, Duncan says, that “Williams was never taken up in England”.
Posted by Ian Pindar at 9:43 AM 2 comments:
Labels: robert duncan, the times literary supplement

The Arts Council has indefinitely suspended public funds to the Poetry Society, according to the Independent

"I feel sad that many small poetry publishers had their funding axed earlier this year. Maybe the Arts Council shouldn't have put all its books in one basket." Joan Bakewell
Posted by Ian Pindar at 3:18 PM No comments:
Labels: poetry society

Meanwhile, Jane Holland accentuates the positive on her blog, predicting "A New Dawn for the Poetry Society"; Richard Fair gives his account of the meeting (plus a little poem); and Phil Brown at Silkworms Ink offers his perspective.
Posted by Ian Pindar at 1:25 PM No comments:
Labels: poetry society

Update update: And there we have it -- truly extraordinary!
Posted by Ian Pindar at 8:44 AM No comments:
Labels: poetry society

The Good, the Bad and the Ugly

How amazing to read that the bestselling Stieg Larsson Millennium Trilogy now accounts for more than 60 per cent of Quercus’ total book sales. More than 60 per cent! That is an astonishing achievement for my old boss, Christopher MacLehose.

Very sorry to see that the University of California Press has decided to suspend the publication of its poetry book series New California Poetry. The Culture Crunch continues, and poetry is suffering. Why not buy something from the series?

It seems the young David Cameron had a friend at Buckingham Palace, who helped him on his way to the top. Now it looks as if Anonymous at the Palace has decided to put the boot in. And they tell us the monarchy is above politics. Or at least, they want us to think it is.
Posted by Ian Pindar at 4:15 PM No comments:
Labels: culture crunch, monarchy, poetry

So Emporium didn't get shortlisted for the Forward First Collection Prize. Ah well. I guess you get used to this sort of thing after a while. My congratulations to the six poets who did get shortlisted: Rachael Boast, Judy Brown, Nancy Gaffield, Ahren Warner, John Whale and Nerys Williams.
Posted by Ian Pindar at 2:08 PM No comments:
Labels: emporium, forward, gracious in defeat

This song was in my head when I woke up this morning. I think I must be going mad. It’s saccharine nonsense, of course, but this was the first Number One single of the 1970s, and I remember hearing it on the radio when I was a boy.

‘Two Little Boys’ was actually written in 1902 by an American and refers to the American Civil War. You won’t find that reflected in this video, though, which mixes up the First and Second World Wars, plus a few others.

But if all this maudlin sentimentality proves too much, here’s a different take on the 1970s: Billy Connolly singing ‘Two Little Boys in Blue’, which contains the immortal lyrics:

Now the duty sergeant said, ‘Tuck the prisoners into bed
But before you take their cocoa through
Keep them in their cells and hit them where it tells
But don’t leave them black and blue.
You can kick them in their balls, bounce their heads off of the walls,
Bash them on the kidneys, too.
Beat them on the legs and thighs, but don’t give them black eyes
Or you’ll be a prisoner, too.’

Posted by Ian Pindar at 9:51 AM No comments:
Labels: nothing really

"If only – I keep saying year in year out – it were possible for 'us' to have a place, a location, to which we could resort, singly or otherwise, and to which others could follow us as dogs follow each other – without formality but surely – where we could be known as poets and our work be seen – and we could see the work of others and buy it and have it! Why can't such a thing come about? It seems so brainless and spineless a thing for us to be 'exiles' in too literal and accepted a sense. Being exiles might we not at least, as exiles, consort more easily together? We seem needlessly isolated and we suffer dully, supinely. I am not one for leading a crusade, but I'd lead a little group through the underbrush to a place in the woods, or under a barn if I thought anyone would (or perhaps, could) follow me. Or I'd follow. The basis for an agreement is the thing that is perhaps lacking. And perhaps your catholic breadth of character, more than your mind, even, might be that thing – and the thing we admire. But nobody moves – or moves only singly. Is this hope?"

John Ashbery Goes to the Movies

You can read Michael Glover’s “John Ashbery Goes to the Movies” over at PN Review.

Some of his [Ashbery's] recent favourites have included David Lynch's Inland Empire and There's Something About Mary, starring Ben Stiller and Cameron Diaz. 'I saw that one about four times. All the essential dirty parts were cut for TV.' For all his addiction to home cinema, he made at least one trip out to the movie house recently, to see Sacha Baron Cohen camping it up in Brüno. 'That has to be the filthiest non-porn movie ever made,' he wrote to me later, 'and worth seeing if only for that, though it's quite funny. There was only one other person in the audience.'

ASHBERY: Well, yes, in particular in relation to a Daffy Duck cartoon called Duck Amuck, in which you see the artist's pen being dipped in the inkwell and then drawing Daffy, and then sort of tormenting him by adding an extra beak or drawing a monster about to destroy him. All the time the artist is invisible. The same thing, it seems to me, happens to Satan and his fellow fallen angels in the first book of Paradise Lost, where God is almost comically absent, at least as far as the denizens of Hell are concerned. (pp.58-9)