“There is real gold in this volume. Although many of Pindar’s poems are informal, it includes a fine satirical sestina, ‘Les Vacances de Monsieur P.’, an off-beat sonnet sequence, ‘The Prophecies’, and an impressive pantoum, ‘Death of a Senator’. His interests are broad, his responses to them musically gratifying and emotionally and intellectually deep. Pindar’s inspiration comes from the fragility of life, his atheistic conviction that death is just that . . . Whether or not you share his views on God, the Monarchy or women, I expect you will be moved by the eloquence in much of Emporium. I was about to say that Ian Pindar is a promising poet; but no, he is already a significant one.”

Many music lists seem to have decided that PJ Harvey’s latest is the finest album of the year. I’ve tried to like it, I really have, but in the end it strikes me as a bit, well, sappy. So as an antidote to all that here’s my choice . . . 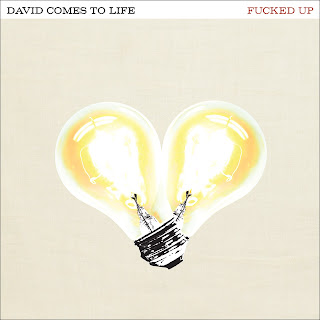 Album of the Year: Fucked Up, David Comes to Life
So this is where punk went. Some might say up its own fundament, but here it is: a punk concept album. It’s a story of boy (David Elliade) meets girl (Veronica Boisson), girl gets blown to smithereens, boy wrestles with inner demons and comes through it all somehow (although even the band seem unsure quite what happens). “Queen of Hearts”, the song in which David meets Veronica, is a lovely angry romp. Here’s the video – and there’s also another version sung by school children:

And here are the lyrics of “Queen of Hearts”, so you can sing along.

The CD comes with all the lyrics, and perhaps unusually for a punk band Fucked Up’s lyrics include unexpected rhymes such as “facade” and “laud” (“Running on Nothing”). There’s also a song called “The Other Shoe”, which includes the refrain de nos jours: “We’re dying on the inside.” There’s a short film about the making of the album here. Wonderful stuff – and Pink Eyes really gives it his all (his voice reminiscent of the lead singer of Killdozer).

Single of the Year: The Weeknd, “House of Balloons/Glass Table”
Sadly, I’m old enough to remember Siouxsie and the Banshees’ “Happy House”, so it was nice to hear it sampled here, but slowed down to make it appear even more sinister/deluded. It seemed to sum up the mood of this pretty wretched year, really. We’re all in it together in the happy house. The segue into “Glass Table” (why “bring out the glass table”? Can anyone explain? Cocaine?) is utterly inspired. Not since Tortoise’s Millions Now Living Will Never Die have I enjoyed such a crashing change of gear. Inexplicably, you can download “House of Balloons/Glass Table” for free – quite legally – here, along with the rest of the album, also called House of Balloons, the songs on which, being “chillwave-tinged R&B” (it says here), can at times be a little sappy for my taste, albeit satisfyingly potty-mouthed.

But it’s not all “popular” music. Here’s some of the other stuff I’ve been listening to:


Toumani Diabate, King of the Kora

And that’s quite enough of that.

Happy Holidays, etc.
Posted by Ian Pindar at 10:56 AM No comments:
Labels: fucked up, music

Thought for the Day


The major facts are simply not faced. It is admitted, for instance, that people sometimes lose their jobs; but then the dark clouds roll away and they get better jobs instead. No mention of unemployment as something permanent and inevitable, no mention of the dole, no mention of trade unionism. No suggestion anywhere that there can be anything wrong with the system as a system; there are only individual misfortunes, which are generally due to somebody’s wickedness and can in any case be put right in the last chapter. Always the dark clouds roll away, the kind employer raises Alfred’s wages, and there are jobs for everybody except the drunks.


'Even in the best of times, the finance sector hasn't paid anything like as much to the state as the state has had to pay for them since the great crash. According to the IMF, British taxpayers have shelled out £289bn in "direct upfront financing" to prop up the banks since 2008. Add in the various government loans and underwriting, and taxpayers are on the hook for £1.19tn. Seen that way the City looks less like a goose that lays golden eggs, and more like an unruly pigeon that leaves one hell of a mess for others to clear up.'

Great piece by Aditya Chakrabortty in today's Guardian. I'm not sure 'bankocracy' will catch on, though.

Should the arts be more selective about sponsors?


I love, by contrast, the way that Thomas Bernhard unfailingly bit off every hand that fed him: denouncing all the prizes that came his way but always accepting them because, in his own words, "I'm greedy for money, I have no character, I'm a bastard too." What integrity!

Geoff Dyer in the Observer

Posted by Ian Pindar at 9:40 AM No comments:
Labels: sunday sermon

"I’m uncomfortable about the fact that Aurum Funds, an investment company which exclusively manages funds of hedge funds, is sponsoring the administration of the Eliot Prize; I think poetry should be questioning not endorsing such institutions and for that reason I’m withdrawing from the Eliot shortlist."

Update: Now John Kinsella has withdrawn. I feel sorry for the Poetry Book Society (even if it is a little conservative and stuffy in its poetic tastes), which is a victim, indirectly, of hedge fund managers and other banksters... And TS Eliot was indeed a banker, although not, as far as we know, a bankster. Banking was a more respectable and responsible business in his day, as Ian Hislop recently explained in When Bankers Were Good.
Posted by Ian Pindar at 11:12 AM No comments:
Newer Posts Older Posts Home
Subscribe to: Posts (Atom)